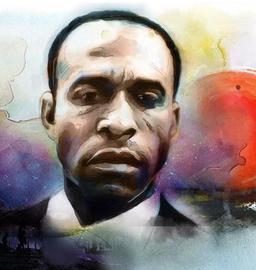 Principles of the NBN:
​*New Black Nationalists central and historic task is to organize for the creation of an independent Black-led, non-heteropatriarchal nation-state on the continental landmass of America's settler state by any means necessary.
*New Black Nationalists adhere to the ideology of Black Nationalism as a set of beliefs and practices that promotes the unity of the Black Commons: develops, maintains, and advocates national consciousness, identity, and self-determination to create a Black-led nation-state.
​*New Black Nationalists are not Pan-Africanists, Afrocentrists, Afropessimists, or Black Atlanticists, ideologically or programmatically speaking.
*New Black Nationalists goal of creating an independent Black nation-state is an integral component of the African/Black Diaspora international struggle to accelerate successful national liberation movements to overthrow neo-colonial rule across the planet.
​*New Black Nationalists embrace poet-author Alice Walker’s originalist articulation of 'womanism' as an indispensable social theory to achieve Black women’s emancipation, the transition to a non-heteropatriarchal Black nation, and its New Humanism ideals.
*New Black Nationalist ideology and beliefs are grounded in the philosophical system embodied in the collective writings of Martinican theorist Frantz Fanon. The coupling of Fanon’s Decolonial Theory on race, along with his constructs on dialectics, phenomenology, ontology, and ‘New Humanism’, comprise a unified and coherent system of ideas to work out the Black nationalist agenda for liberation in America's settler state.
​*New Black Nationalists believe Black people within the borders of America's settler state constitute an historically evolved oppressed nation as subjects of an imperial empire.
*We believe enslaved Blacks and their descendants originated from a common geographical region primarily but not exclusively in West Africa.
*We hold that as members of different tribes and ethnic groups they inhabited a common geographical space and constituted the majority population in Alabama, Louisiana, Georgia, Mississippi and South Carolina by the mid-1800s.
*Over time, we believe these different tribes and ethnic groups descended from West Africa developed a serviceable lingua franca and subsequently common fluency in the English language.
*We believe the melding and adaptation of Black slave and free Black's African customs, agricultural practices, arts, religious practices, music, language, dress, and common experience navigating the atrocity of the dominant plantation slavery system created a common culture.
*We believe these specific conditions Black slaves and free Blacks endured over the course of 250 years until slavery was abolished in 1866 by the 13th Amendment, created a distinct psychological makeup.
*Between the end of Black Reconstruction in 1876 and the advent of the 1900s, we believe this new Black nation developed a nascent class system, inclusive of a middle-class and national bourgeoisie.
​*Therefore, based on being a historically constituted and stable community of people, formed on the basis of a common language, territory, economic life, and psychological make-up manifested in a common culture, we hold the Black Commons a distinct nation of people.
*As a Black nation, the Black Commons in America's settler state are entitled to full self-determination. The right to self-determination means that only the nation itself has the right to determine its destiny, that no one else has the right to forcibly interfere in the life of the nation, to destroy its institutions, to violate its customs, to repress its language or curtail its rights.
*The right to self-determination means that a nation may arrange its life in the way it wishes on the basis of autonomy. It has the right to enter into federal relations with other nations. It has the right to complete secession. Nations are sovereign and all nations have equal rights.
*Based on the specific circumstances and conditions that exist to exercise self-determination, the Black Commons have the right to decide where its collective sovereignty will reside, either an independent governance entity of its own creation or in association with another sovereign entity. In addition to the option of creating a national homeland in the states of Alabama, Louisiana, Georgia, Mississippi and South Carolina (Black Belt South), exercising the right of self-determination may also include Black autonomous regions of a larger multi-racial state, independent Black city-states, and the Darker Nation's voluntary incorporation into a multi-racial nation-state(s) of its choosing.
​*New Black Nationalists support the right of self-determination of all oppressed people internationally, including those nations, national minorities, and ethnic groups waging "people's wars" to liberate themselves from foreign domination.
* New Black Nationalists support the creation of an independent homeland for Latinx, and all indigenous First Nation people living within the boundaries of American Empire. We support negotiated forms of autonomy for Asian-Americans if they so desire.
*In creating a non-heteropatriarchal nation-state New Black Nationalists hold that Black women, trans people, non-binary and gender non-conforming people are fully invested subjects of the republic.
*New Black Nationalists reject the proposition that only those women designated as female by traditional Western standards are women. We believe gender and sexual identity are socially constructed. In this respect we are not bio-essentialist in terms of gender role assignment which is fluid and based on cultural specificity for any given people. We accept trans individuals, non-binary and gender non-conforming people as they represent or present themselves.
*New Black Nationalists support the full and unfettered participation of women, trans people, non-binary and gender non-conforming individuals in the Black Liberation Movement, including leadership positions.
*New Black Nationalists condemn racist ideology, sexism, ageism, homophobia, and xenophobia in all its manifestations.
*New Black Nationalists place the collective interests of the Darker Nation above the interests of the individual. As such, we dissent against the bedrock premise of Western philosophical and value systems which place the rights and interests of the individual above all. ​
Black Nationalist - Fanonist - Womanist
Frantz Fanon
​NewBlackNationalism.com
Ideology
Philosophy
​A Black Nation
​Self-Determination
Our Central Task
​Self-Determination
​A Post-Heteropatriarchal  New Humanist Society