1
BLM 2.0
What We Believe
Contact Us
Reparations
Fanon Forum
Afrofuturism
BLOG
Education
Environment
Justice
Economy
Defense
Foreign Policy
Health Care
Science/Technology
Culture
Rights
​ TVR Home
Draft Program for a
Majority Black-Led Nation-State
April 2, 2022 - June 19, 2023
​Government
Legislative
​Executive
Judicial
Submissions
Program Updates
Draft Program
​Assata Shakur
Denmark Vessey
Denmark Vesey's
Notebook
​Reparations
In Notebook Entry 1, we previewed the Vesey Republic's design as a majority Black-led nation-state. The Vesey Republic exalts the Black Commons' collective welfare as paramount to the appetites of individual interests, private property, and wealth as the meridian of our liberatory ethos. The institutional and cultural structures of racial domination and heteropatriarchy imposed on the Black Commons are arrested and constrained by the chrysalis of our nationalist revolution.
As vision holders of a new nation, subverting the logic of previous social systems requires more than a transformative agenda. The republic's governing structure must flow to the rhythms of the Black Commons national destiny. Conceived in the tumult of revolutionary struggle, Vesey's "Extended" Republic as proposed provides constancy to hold the center.  Its elasticity is supple enough to accommodate new social actors imbued with fresh political power and idealistic demands worthy of implementation.
​Vesey's "Extended" Republic's design is comprehensive and sufficiently flexible to govern an independent city-state, autonomous region, or nation-state. It's unicameral conjoined legislative and executive authorities facilitates quick, decisive, and unified action. A parliamentary "No Confidence" motion triggers procedures to change the ruling government on an accelerated time frame. Further, the Commons are invested with "Direct Democracy" referendum and initiative authorities to alter the constitution and existing laws. Women are empowered with majority status to administrate their own autonomous region. Over the next year we look forward to a vigorous debate on all proposals to create a revolutionary governing structure for the Black Commons. Lean in.
Contact 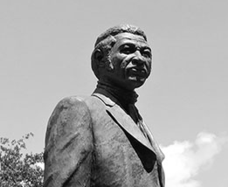 The Vesey Republic
Project of the New Black Nationalist Movement
lllll
​NBN Home
​First Minister  & Cabinet
Executive
​Legislative
Chamber of Commons
Proposed: Vesey Republic Structure of Government
- Elected for 3-Year Terms
Party members or political Independents can be elected.
- The Chamber of Commons [COC] is a unicameral legislature. There is no or upper house. The COC assumes all the duties and responsibilities of the Senate in the presidential constitutional system.
- Chambers members may be subject to recall with by a fixed number of petitions by registered citizens in their districts.
- The Committee of the Wise is an advisory body, that serves at the pleasure of the Chamber of Commons. As a group of veteran and sage public policy advisors, the COC's charge is to provide public critical non-partisan evaluations of legislative proposals, initiatives and referendum.
​- The First Minister is elected by a simple majority of the largest party or coalition of parties forming a majority of the Commons.
- The First Minister as the head of government does not have a term or term limits. She/He may serve as long as they enjoy the confidence of a simple majority in the Chamber of Commons.
- The First Minister can be voted out of office at any time if a "Motion of No Confidence" is passed by a simple majority of the Chamber of Commons.
Calling a motion of no confidence is one of two ways that an early general election can be triggered.
The other way to trigger an early general election at least two thirds of Commons would need to support a motion calling for an early general election.
How does a vote of no confidence work?
The vote of no confidence is formally brought about through a motion in parliament stating, “That this Chamber has no confidence in Government.” The motion is debated and then voted on. If a majority of Commons vote in favor of the motion, the government will be dissolved.
Passage of the motion would not automatically trigger a general election.
If the government is brought down by the vote, there would follow a 14-day period in which to form a new government, based on the existing make-up of MPs.
The House of Commons would then have to vote on whether or not they now had confidence in the new government. Were this to fail, a general election would be triggered.
​Ministry of Justice High Court
​Judiciary
​- The Ministry of Justice is an independent and co-equal department of the federal government.
- The High Court shall be the superior court of the Vesey Republic.
- The number of the High Court Justices shall be an odd number and be enumerated in the Vesey Republic Constitution.
High Court Justices will be nominated by the First Minister and approved by a simple majority vote of the Chamber of Commons.
- High Court Justices shall serve a term of nine years and cannot serve more than two consecutive terms. The terms shall be rotated every three years.
Initiatives, Referendum & Direct Democracy Rights
The Commons
Advisory ​Committee of the Wise
​Ministries & Civil Service
​Appeals and Lower Courts
- The principle of direct democracy is that all citizens take part in decision-making.
- There are three instruments of direct democracy: mandatory and popular referenda and initiatives.
Citizens can launch a popular initiative to demand a change to the constitution.
A vote must be held on any amendment to the constitution resulting in a mandatory referendum.
A majority of 60% of eligible Vesey Republic citizens and the Womens Autonomous Province must support final passage of an amendment to the Vesey Republic's constitution.
Any Vesey Republic citizen who is eligible to vote can sign a popular initiative. The number of citizens required to launch their own popular initiative and the number of valid signatures to be collected in favor of the proposal will be determined by an act of the Chamber of Commons.
Womens Autonomous Province