1
​Frantz Fanon
Analysis
FGM Home
Commentary
​Fanonian Theory 2.0
​Mireille Fanon Mendes-France
Mireille Fanon Mendes-France
​Josie Fanon
Mireille Fanon, the eldest daughter of Frantz Fanon and Michèle Weyer was born in 1948 in France. Fanon's relationship with Michelle began in Lyon, France where they were both students. Fanon refused to marry Michelle, and by 1949 met his future wife, Josie whom he married in 1953.
After coming under pressure from families and friends, Fanon acknowledged Mireille as his issue. Mireille took his name, but there is no record that Fanon had a relationship with his daughter.
In November 1977, Mireille married Pierre-Michel Arnaud in Abidjan, Côte d'Ivoire. They were divorced in 1983. She married for the second time in Paris 14th arrondissement , on November 30 1985, with Bernard Mendès-France (son of the President of the Council, Pierre Mendès France ), who died in 1991. Mireille and Bernard had a son, Samuel.
Mireille taught literature at the National Education and didactics at the continuing education center of the University of Paris V- Descartes and was invited by many universities including that of California at Berkeley on issues of international law and conflict resolution. She has also worked for UNESCO and for the National Assembly .
In 2009, she received the Human Rights Prize from the Council for Justice, Equality and Peace. She is a member of the French Jewish Union for Peace. Since 2011, she has been an expert within the United Nations Working Group on People of African Descent, of which she chaired from 2014 to 2016.
In May 2018, she participated in the international conference "Bandung du Nord," organized by the Decolonial International Network in order to "question colonial memory."
Mireille Fanon-Mendès France. In addition to being an authority on Fanon, Fanon-Mendès France is a scholar of decolonialism, UN expert on people of African descent, legal advisor in a law firm in France, and human rights activist on Palestine and other places where the right to self-determination is in question. She also works on issues of land tenure in countries where people were enslaved and indigenous people annihilated after colonization. 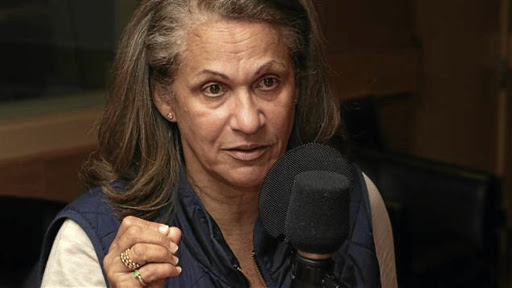