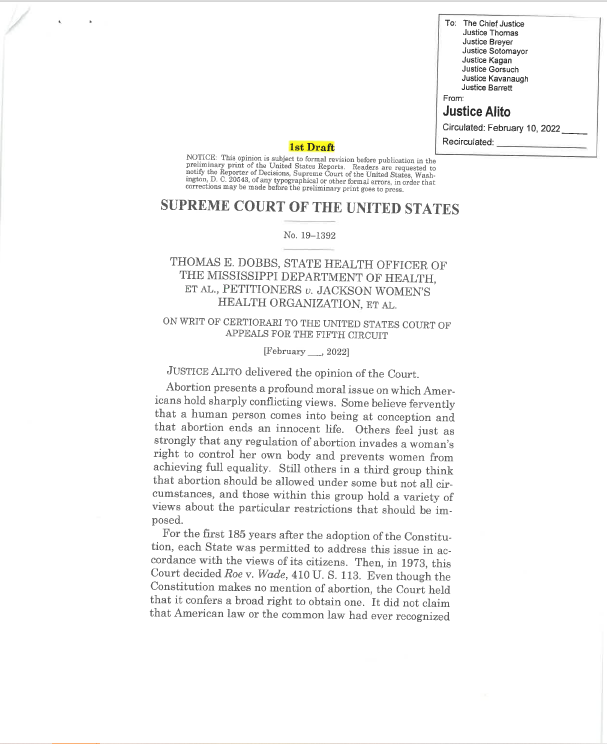 ​NBN Home
SCOTUS Draft Opinion
News /Updates
Erasing Roe: The Abortion Wars
​Supreme Court February 10, 2022 1st Draft: Thomas E Dobbs, State Health
Officer Of The Mississippi Department of Health, ET AL., Petitioner v Jackson
Women's Health Organization, ET AL.
A New Black Nationalist Forum
The 1st Draft Opinion - Circulated by Justice Alito
Feature Forum
Critical Passages for Alito's First Draft
“We hold that Roe and Casey must be overruled. The Constitution makes no reference to abortion, and no such right is implicitly protected by any constitutional provision....”
“Roe was egregiously wrong from the start. Its reasoning was exceptionally weak, and the decision has had damaging consequences. And far from bringing about a national settlement of the abortion issue, Roe and Casey have enflamed debate and deepened division. It is time to heed the Constitution and return the issue of abortion to the people’s elected representatives.”
“In the years prior to [Roe v. Wade], about a third of the States had liberalized their laws, but Roe abruptly ended that political process. It imposed the same highly restrictive regime on the entire Nation, and it effectively struck down the abortion laws of every single State. … [I]t represented the ‘exercise of raw judicial power’… and it sparked a national controversy that has embittered our political culture for a half-century.”
“The inescapable conclusion is that a right to abortion is not deeply rooted in the Nation’s history and traditions. On the contrary, an unbroken tradition of prohibiting abortion on pain of criminal punishment persisted from the earliest days of the common law until 1973.”
“In some States, voters may believe that the abortion right should be more even more [sic] extensive than the right Casey and Roe recognized. Voters in other States may wish to impose tight restrictions based on their belief that abortion destroys an ‘unborn human being.’ ... Our nation’s historical understanding of ordered liberty does not prevent the people’s elected representatives from deciding how abortion should be regulated.”
“We have long recognized, however, that stare decisis is ‘not an inexorable command,’ and it ‘is at its weakest when we interpret the Constitution.’ It has been said that it is sometimes more important that an issue ‘be settled than that it be settled right.’ But when it comes to the interpretation of the Constitution — the ‘great charter of ou“On many other occasions, this Court has overruled important constitutional decisions. … Without these decisions, American constitutional law as we know it would be unrecognizable, and this would be a different country.”
”Casey described itself as calling both sides of the national controversy to resolve their debate, but in doing so, Casey necessarily declared a winning side. … The Court short-circuited the democratic process by closing it to the large number of Americans who dissented in any respect from Roe. … Together, Roe and Casey represent an error that cannot be allowed to stand."
“Roe certainly did not succeed in ending division on the issue of abortion. On the contrary, Roe ‘inflamed’ a national issue that has remained bitterly divisive for the past half-century....This Court’s inability to end debate on the issue should not have been surprising. This Court cannot bring about the permanent resolution of a rancorous national controversy simply by dictating a settlement and telling the people to move on. Whatever influence the Court may have on public attitudes must stem from the strength of our opinions, not an attempt to exercise ‘raw judicial power.’”  r liberties,’ which was meant ‘to endure through a long lapse of ages,’ we place a high value on having the matter ‘settled right.’”
​“We do not pretend to know how our political system or society will respond to today’s decision overruling Roe and Casey. And even if we could foresee what will happen, we would have no authority to let that knowledge influence our decision. We can only do our job, which is to interpret the law, apply longstanding principles of stare decisis, and decide this case accordingly. We therefore hold that the Constitution does not confer a right to abortion. Roe and Casey must be overruled, and the authority to regulate abortion must be returned to the people and their elected representatives.”